I upgraded straight from Windows 7 to Windows 8.1 skipping windows 8 in between. You first have to download a setup file that asks you the serial numbers and a few other things. Then it gives you the following options:
1. Install Now
2. Install from USB Disk
3. Install from ISO

I chose the install from ISO option as I thought it would be a good idea to have the ISO around. Once the ISO had been created I used the Windows 7 USB install tool to create a bootable USB disk. Backed up the ISO and did a fresh install of Windows 8.1 wiping out the previous Windows 7 install.

The Windows 8.1 install was fast, but once the install had finished Windows booted up and asked for an online account. My previous experience of Windows 8 RC had taught me the use of windows live/Hotmail accounts, and I logged in using one of my accounts. In the Windows 8 RC install, you couldn't login using the Hotmail account without internet access. I created a local account as a backup in case I ever run into network issues. 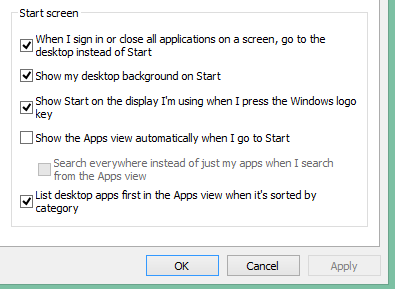 Once the system had rebooted it started getting "apps" ready. I assume it was downloading the latest Windows 8.1 Metro apps from the "app" store. This took a while, I'm on a slow connection. The machine I'm using is an Alienware M11XR2, which does not have a touch screen. The first thing I did was to modify the settings for the start menu so it behaved more like previous version of windows.

I downloaded the latest synaptic touchpad driver from their website, but it won't install. A forum post mentioned that the driver has not been signed properly, though I'm not sure if that is the real problem. In any case, I had to download the older driver from Dells support site, which doesn't have two finger scroll. That's kind of a pain, considering Google chrome has done away with the scroll buttons on their scroll bars.

The experience has been positive so far. There are two things that bother me though. I don't like using a Hotmail/Outlook account to login to the system. I would have preferred a local computer account that hooks into online accounts using OAuth, etc. And second, the latest synaptic touchpad driver not working with Windows 8.1 was a downer. Lets see what the future brings...
at January 24, 2014